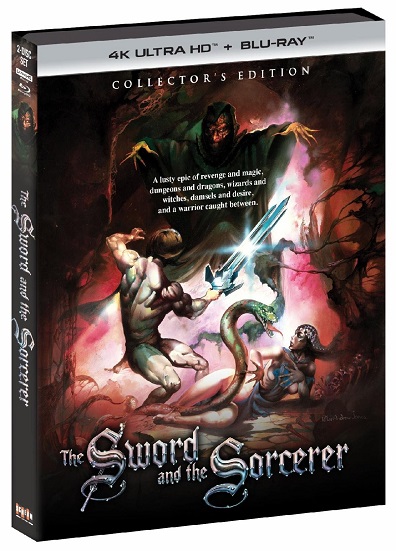 The Sword and the Sorcerer [Collector’s Edition]

At the dawn of the 1980s, Albert Pyun was an aspiring filmmaker pounding the pavement in Hollywood, knocking on doors and doing his best to differentiate his projects from those of the hundreds (thousands?) movies around Tinseltown. Pyun had big ideas—maybe too big for an unproven talent trying to get his foot in the door – but so have many writers competing with him for financial money. However, Hawaii-born Pyun had some things he didn’t: experience working under two of the most famous names in Japanese cinema, Akira Kurosawa and Toshiro Mifune; an impressive collection of storyboards, drawings and makeshift props; and sheer tenacity. Pyun and his partners did not give up.

Pyun’s ever-evolving project was a fantasy epic, filled with medieval magic and bloodshed, that would eventually become The Sword and the Sorcerer (1982). It’s not hard to see why producers didn’t really splurge to invest in something that required so many expensive sets, costumes, and special effects at the start of this decade. But then there was a shift in mentality: namely, the Arthurian fantasy of John Boorman Excalibur (1981) made a ton of money at the box office, and a big-budget adaptation of Conan the Barbarian (1982) was announced to be in development. Suddenly, a movie about an undead wizard, warring kingdoms, and a sword-swinging hero didn’t seem too far out in left field. Brandon Chase – a longtime distributor of exploitation films who had recently enjoyed success as an independent producer on Alligator (1980) – saw an opportunity to cash in on Conanthe marketing of major studios and greenlit The Sword and the Sorcerer with a mind to beat the blockbuster Schwarzenegger into theaters.

The Sword and the Sorcerer tells the story of Prince Talon, the true heir to the throne of Edhan, who was forcibly taken from his family by the evil King Cromwell (United States Invasionby Richard Lynch). Cromwell conquered his lands with the help of a wizard named Xusia, whom he raised from the dead with the help of a witch – and later betrayed, sending him to his death once his black magic was no longer necessary to wage war. More than a decade passes, and another prince, Mikah (3-D jawsof Simon MacCorkindale) attempts a rebellion against Cromwell, but is captured. His sister, Princess Alana (Kathleen Beller), enlists a mischievous mercenary to save her brother, unaware that this mysterious adventurer is actually the exiled Price Talon (Lee Horsley).

With so many princes, kings, warriors and advisers, it can be a little difficult for a first-time viewer to figure out who is working for whom and why – the film has a season of game of thrones story tight in its 99 minute runtime. But, the Richards Lynch and Moll, the latter, future star of night yard, playing the evil wizard Xusia under several pounds of murderous-looking prosthetics – are clearly the bad guys, and the film leaves no doubt who you’re supposed to support. If you can relax and settle in for the ride, The Sword and the Sorcerer is a lot of fantastic fun, not to mention that it is sometimes a real treat for the eyes.

Any fan of Albert Pyun’s forty-year-old filmography probably thinks he had more ideas in his little finger on a weekday afternoon than many filmmakers have had throughout their careers. It’s probably both his blessing and his curse, as so many of his films are so full to the point of overflowing with wild and creative concepts, but have been repeatedly let down by their budgets, tweaked producers, and other issues. (One sometimes wonders if even a $100 million budget would be enough to do justice to some of Pyun’s movie ideas.) However, the moon and stars somehow seemed to align for The Sword and the Sorcerer. As troubled as Pyun’s very first production was, a lot went right, like a solid cast and the contributions of some legendary future makeup and SFX talents: Oscar-winning makeup artist Gregory Cannom and effects superstars The Chiodo Frères. , of Killer Klowns from Outer Space and Peewee’s Big Adventure notoriety.

The Sword and the Sorcerer achieved his goal and managed to beat Conan on cinema screens in a few weeks. The indie gamble paid off: it was a huge hit, raking in nearly $40 million to become the biggest indie hit of its year. While reviews were mixed, most critics agreed that its wild visuals were top-notch. A few years later, once video and cable really opened new avenues for moviegoers to find the film, it became an even bigger cult favorite and one of the most memorable entries in the sword and sorcery genre suddenly. prolific.

Yell! Factory released the film in a new 4K UHD/Blu-ray edition on its 40th anniversary. Taken from a re-scan of the original negatives, it is visually ahead of any previous home video release of the film. While the film’s low budget and general “fog” – so many scenes are shrouded in mist or smoke – means this isn’t a release that will necessarily push the limits of your 4K home theater setup. , the UHD disc will offer a very noticeable improvement in many dark scenes in the film, providing an extra level of detail that is lost in lower resolution presentations. (The Blu-ray included in the set isn’t something to sneeze at, though, and will be fantastic for anyone used to older editions of the film.) The real prize to be found here is the sheer number of bonus features from the exit. characteristics.

The featured extras contributor to the disc is Pyun himself, who appears in both a new on-camera interview and a feature commentary. The filmmaker, who has suffered from dementia for years but has courageously continued to make films despite it, talks about his first feature film with both tenderness and candor. He addresses the many issues the film faced, but also shares some great stories about things like sneaking into Charlton Heston’s dressing room to introduce him to the film, David Hasselhoff’s failed audition, and working with a coked-up Richard Lynch. For Pyun fanatics – whose ranks seem to be growing every year – these two features are worth the price of admission. But wait, there’s more!

The special edition of Shout! includes a bountiful assortment of marketing materials, galleries and trailers, but even more exciting is a slew of newly produced interviews courtesy of Samuelson Studios. A few highlights include Princess Alana (and future Dynasty star) Kathleen Beller, who revisits the film for the first time in what feels like decades, talking about both the good and bad things she witnessed on set, and talks at length about being enveloped by the 14 foot python from the movie. We also have a chat with the Chiodo brothers, who talk about building the film’s memorable Crypt of Souls setting, and another with editor Marshall Harvey, who shares a story about Oliver Reed attempting to record the trailer voiceover but stumbling over character names. thanks to a few too many martinis. (There are also new interviews with FX artist Allan Apone and co-writer John Stuckmeyer.) fall that was ultimately used in the final release of the film. Each interview subject looks back on that dark day of filming and addresses the moral implications of keeping that scene in the film. It’s a very interesting mini-documentary about an event that everyone still seems visibly shaken by four decades later.

With the best home video presentation of the film and hours of additional new features detailing its difficult path to the screen, the collector’s edition of Shout! The Sword and the Sorcerer is an easily recommended mic for any fan of 80s fantasy or the work of Albert Pyun.