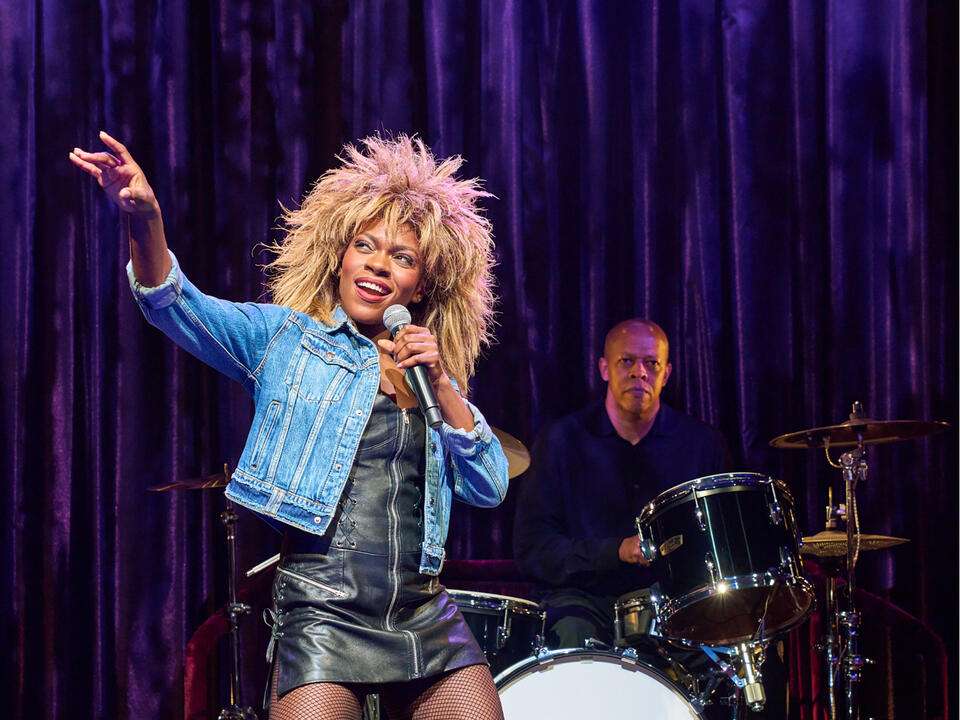 PART OF BROADWAY IN CINCINNATI

Descriptions of the shows of the 22/23 season:

An uplifting comeback story like no other, TIN – The Tina Turner Musical is the inspiring journey of a woman who broke down barriers and became the queen of rock n’ roll.

One of the world’s best-selling artists of all time, Tina Turner has won 12 Grammys

The awards and his live shows have been seen by millions, with more concert tickets sold

than any other solo artist in music history.

Featuring his much-loved songs, TIN – The Tina Turner musical is written by Pulitzer

Celebrating its 50th anniversary, a riveting new production of the iconic musical phenomenon returns to the stage. Originally staged by London’s Regent’s Park Open Air Theater and led by acclaimed director Timothy Sheader (Crazy for You, Into the Woods) and forward-thinking choreographer Drew McOnie (King Kong, Strictly Ballroom), this production won the 2017 Olivier Award for Best Musical Revival garnering unprecedented reviews and accolades. Attracting both theater audiences and concert music fans, this production pays homage to the historic 1971 Billboard Album of the Year while creating a modern theatrical world that is uniquely fresh and inspiring.

With lyrics and music by Emmy, Grammy, Oscar and Tony winners Tim Rice and Andrew Lloyd Webber, JESUS ​​CHRIST SUPERSTAR takes place against the backdrop of a series of extraordinary events during the last weeks of the life of Jesus Christ, seen through the eyes of Judas. Reflecting the rock roots that defined a generation, the legendary score includes “I don’t know how to love it”, “Gethsemane” and “Superstar”.

Inspired by beloved films, the new romantic and adventurous musical ANASTASIA is finally on a trip to Cincinnati! From the Tony Award®-winning creators of the Broadway classic

Ragtime, this dazzling spectacle transports us from the twilight of the Russian Empire to the euphoria of 1920s Paris, as a courageous young woman sets out to discover the mystery of her past. Pursued by a ruthless Soviet officer determined to silence her, Anya enlists the help of a dashing con man and a lovable ex-aristocrat. Together they embark on an epic adventure to help her find a home, love and family.

ANASTASIA features a book by acclaimed playwright Terrence McNally, a lush new score by Stephen Flaherty (music) and Lynn Ahrens (lyrics) based on the original direction by Tony Award winner Darko Tresnjak with choreography by Peggy Hickey and tour direction by Sarah Hartmann.

Staying hopeful in tough times can take a lot of determination, and sometimes a lot of determination comes in a surprisingly small package. Little Orphan Annie has reminded generations of viewers that the sun is always around the corner, and now the most beloved musical of all time is about to return in a new production, as you remember and just when we need it most.

ANNIE, directed by Jenn Thompson, features the iconic book and score, written by Tony Award® winners Thomas Meehan, Charles Strouse and Martin Charnin. This celebration of family, optimism and the American spirit remains the ultimate remedy for all the blows that life throws at you.

Call it “musical paradise” (Rolling Stone). Call it “the rowdiest new musical in years!” (The Hollywood Reporter). To call TOOTSIES! This love letter to the theater tells the story of Michael Dorsey, a talented but difficult actor who struggles to find work until a breathtaking act of desperation lands him the role of his life. With a hilarious Tony®-winning book by Robert Horn and an outrageously clever score by 2018 Tony Award winner David Yazbek (The Band’s Visit, Dirty Rotten Scoundrels), this New York Times critic’s pick is “a joyous delight” ( The Washington Post) it’s “so full of punchlines, it should be called a musical joke!” (Bloomberg). “In these turbulent times, when the world seems out of balance, we need a place to let the good times roll,” raves Rolling Stone. “TOOTSIES that’s it !”

GORGEOUS-The Carole King Musical tells the true and inspiring story of King’s remarkable rise to stardom, from being part of a successful songwriting team with her husband Gerry Goffin, to her relationship with fellow writers and best friends Cynthia Weil and Barry Mann, to become one of the most successful solo acts in popular music history. Along the way, she’s made more than beautiful music, she’s written the soundtrack for a generation.

Features an impressive array of beloved songs written by Gerry Goffin/Carole King and Barry Mann/Cynthia Weil, including “I Feel The Earth Move”, “One Fine Day”, “(You Make Me Feel Like) A Natural Woman” , “You’ve Got A Friend” and the title track, GORGEOUS has a book by Tony® and Oscar® nominated writer Douglas McGrath, direction by Marc Bruni, choreography by Josh Prince, and won two 2014 Tony® Awards and a 2015 Grammy® Award.

COME SEE HOW THE WORLD COULD BE.

welcome to HADESTOWN, where one song can change your destiny. Winner of eight 2019 TonyAwards®, including Best Musical and the 2020 Grammy® Award for Best Musical Theater Album, this acclaimed new show from acclaimed singer-songwriter Anaïs Mitchell and innovative director Rachel Chavkin (Natasha, Pierre & The Great Comet of 1812) is a love story for today… and forever.

HADESTOWN interweaves two mythical tales – that of the young dreamers Orpheus and Eurydice, and that of King Hades and his wife Persephone – as it invites you on a hellish journey to the underworld and back. Mitchell’s haunting melodies and Chavkin’s poetic imagination pit industry against nature, doubt against faith, and fear against love. Performed by a dynamic ensemble of actors, dancers and singers, HADESTOWN is a haunting and hopeful theatrical experience that grips you and never lets go.

Pop the champagne, RED MILL! THE MUSIC is the winner of 10 Tony Awards®, including Best Musical!

More information on tickets and timetables can be viewed at: