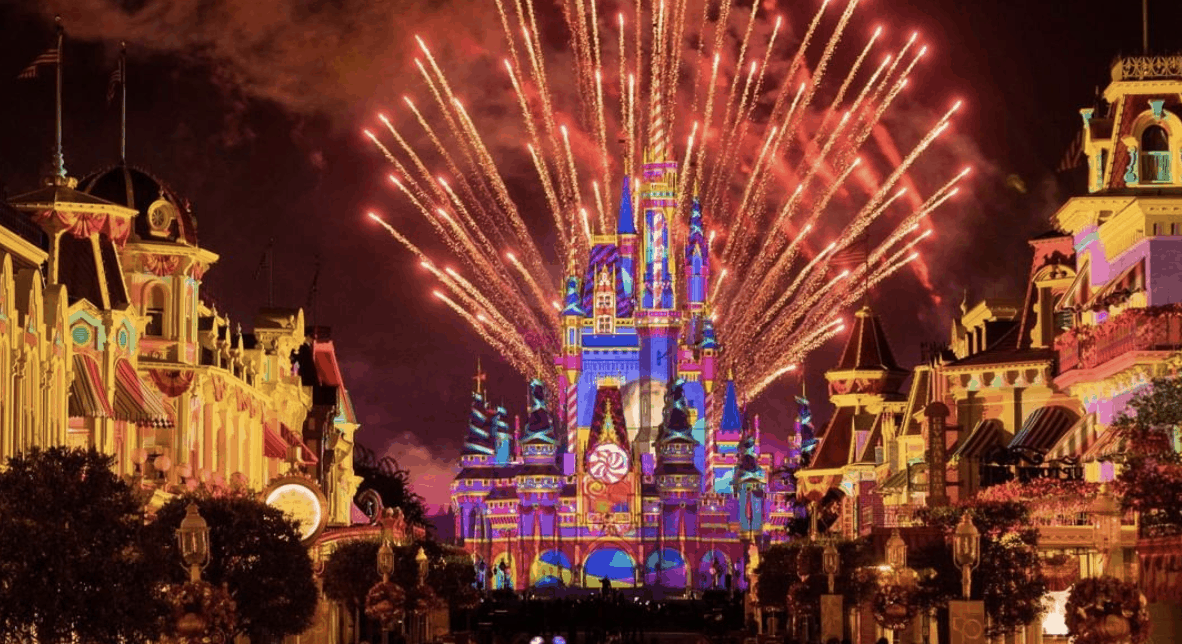 On October 1, 2021, Magic Kingdom launched an all-new fireworks display, Disney Enchantment, to celebrate Walt Disney World’s 50th anniversary. In order to make room for this new nighttime spectacle, we had to say goodbye to the fan-favorite show Happily Ever After, which shone in Disney history on September 29, 2021.

Once Disney Enchantment made its official debut, many fans didn’t hesitate to take to social media to share their honest thoughts and opinions on the series.

That being said, I wanted to share some of my personal thoughts and opinions on the show and answer the question – is Disney Enchantment really that bad?

If you haven’t seen Disney Enchantment yet, spoilers ahead.

For starters, the introduction to Disney Enchantment was promising. I really enjoyed the song “You Are the Magic” which plays specifically for Disney Enchantment. While it didn’t sound as nostalgic or emotional as “Happily Ever After,” I felt like it got the audience excited and the guests excited for the rest of the show. Plus, “You Are the Magic” really has great meaning and fantastic lyrics.

As far as the technology was concerned, that too was amazing. The incorporation of lasers, the projections on Main Street, USA, and the fireworks were all amazing and visually stunning. (In fact, Disney Enchantment actually has more fireworks than Happily Ever After despite being a short show!)

That being said, my biggest problem is that despite Angela Bassett telling the show, in reality I felt like she had nothing to tell because there was such a lack of scenario. Disney Enchantment started to remind me of Wishes, the fireworks display that aired in Magic Kingdom before Happily Ever After. I say this because it starts with telling a story, just like Jiminy Cricket did during Wishes. However, it took a turn in the middle of the show when there was actually no story to tell.

Throughout the middle part, I felt like I was watching random Disney characters, with songs that were all covers, which meant there weren’t enough original Disney songs in my opinion. On top of that, in the Disney songs played, there wasn’t a lot of vocals at all. Most of the songs were instrumental and slowed down a lot.

Another thing I noticed about the music in Disney Enchantment is that Moana had two songs featured in Disney Enchantment. Now don’t get me wrong I love Moana and the soundtrack is amazing, but with so many other original Disney animated films, I felt like Disney could have chosen another classic song to replace one of the Moana Songs.

For example, I would have loved to hear the music from Haunted Mansion, “It’s a Small World,” Pirates of the Caribbean or Carousel of Progress, since all of these attractions are considered classic and openness attractions. If Disney Enchantment is a 50th anniversary show, let’s celebrate the 50th anniversary by showcasing the Parks.

In conclusion, I didn’t feel any nostalgia or emotion while watching Disney Enchantment, and it was the biggest disappointment. BUT, all that being said, the fireworks and the technology themselves are very visually appealing. There is just a huge lack of storyline and a connection to the 50th anniversary of Disney World.

If you haven’t seen Disney Enchantment yet, please enter the show with an open mind. Just because I felt disappointed doesn’t mean everyone will. Disney Imagineers have worked really hard on Disney Enchantment and some may enjoy the show. We all have our own opinions and our own likes and dislikes.

I want to note that I entered Disney Enchantment with a very open mind and did my best despite all the backlash on social media, and I ask you to do the same and make up your own mind on series.

Have you ever seen Disney Enchantment? What did you think of the fireworks? Let us know in the comments below.

The opinions reflected in this article do not necessarily reflect those of Inside the Magic as a whole.