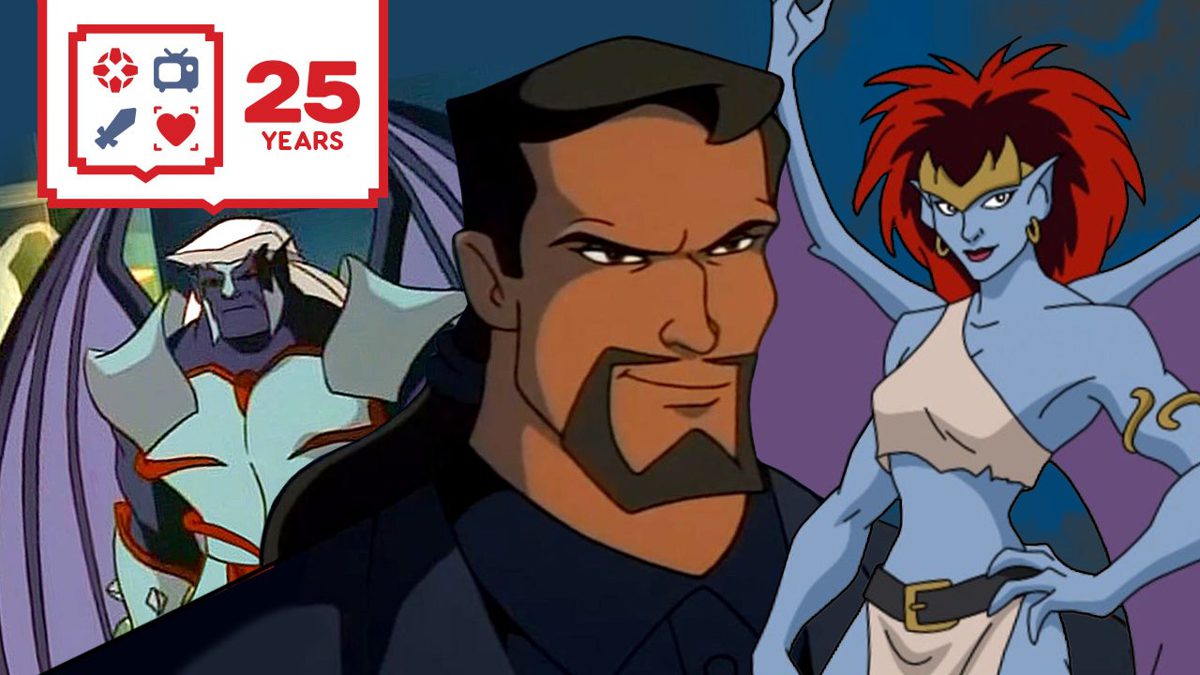 IGN has been officially around for two and a half decades and has witnessed many monumental changes in video game and entertainment culture during this time. To celebrate our long stay on this earth, IGN 25th Anniversary Feature Series will focus on these changes, as well as the movies, video games and TV shows that helped define them. First of all today we return to the beloved cartoon Gargoyles.

In the ’70s and’ 80s, cartoon villains were mostly little losers. Characters like Doctor Doom and Skeletor would be defeated at the end of the episode, only to clench their fists and complain about their minions until their next episode rolled out … and things went pretty much the same way. same way.

But Gargoyles co-creator, co-producer and writer Greg Weisman wanted to change that.

Gargoyles, which ran from 1994 to 1997, was a Disney show about ancient monsters who are – as the opening credits say – “rock by day, warriors by night.” But it would become so much more than that, gaining a cult following in the years after its first airing, which kept it near the top of the animation landscape of that period. And much of that reputation is a result of the way Gargoyles handled her villains … and how, in doing so, she helped redefine anime villainy in the ’90s.

Bruce Wayne with a twist

Weisman had worked with Cary Bates on the DC Comics Captain Atom series, where the series’ antagonist, General Wade Eiling, still had intrigue within the storylines. When Weisman and Bates teamed up to write for Gargoyles, they crafted their main villain taking that quality but removing Eiling’s cruelty and intolerance, instead merging him with the traits of another comic book character – those of Bruce Wayne!

“Bruce Wayne in the comics I read growing up was lovely and a guy you would admire,” Weisman told IGN. “What if you had a good looking villain who would say things like ‘Revenge is a sucker game.’ He didn’t like being a bad guy, he wanted to achieve his goals.

The result was David Xanatos, a billionaire genius who remained a dangerous opponent throughout the series because he always had so many redundant plans that he somehow emerged victorious even after apparently being defeated by the hero. His intricate plans have become such a model for future villains that he even is the namesake of a televised trope. The charm and humor Weisman wanted for the character, who would always be the hero of his own story, was captured perfectly by Jonathan Frakes from Star Trek: The Next Generation.

When seeking to bring tragedy to his characters, Weisman combined his passion for comics with an unlikely inspiration for a children’s cartoon: Shakespeare! The most obvious result was the character of Macbeth, an immortal version of the Scottish King with a Batman twist, between his use of martial arts and technological gadgets. His long life came from a mystical connection with Demona which he sought to end, putting him in the unique position of being both a heroic Gargoyle foe and an occasional ally.

“We loved the irony that he confronts Goliath and says, ‘I’m after your queen, Demona,'” Weisman laughs. “And Goliath just laughs and says,” Demona tried to kill me last week. If you think kidnapping us is going to help you get Demona, you may have a problem.

Gargoyles ‘writers largely avoided the villains’ common motivation for revenge. Even though Demona had betrayed Macbeth, he really wanted to kill her because he was suicidal.

“He’s lost everyone he cared about and he can’t die unless Demona dies,” Weisman explains. “Thanks to the efforts of our heroes, he begins to learn that he still has reasons to live and to continue. We were a syndicated kids’ show, so we never talked about it objectively, but we clearly hinted at it.

Demona is a tragic character. It doesn’t justify his behavior, but there is a tragedy behind it that is real.

Being a children’s cartoon created more conflict than just having to be shy about the motives of dark characters. It also meant strict restrictions on how writers could describe violence and death. Weisman’s team hated the The death of the Disney villain, a common trope where the antagonist is killed off screen, usually by their own actions, and they sought to subvert him whenever they could. For example, in one story, the Megalomaniac Archmage apparently died, but was actually saved by a time-traveling version of himself. Meanwhile, Duncan, Macbeth’s scheming rival for the throne, has fallen from a cliff – but only after being shown burning to death from a magical artifact.

The series was also able to show a surprising amount of onscreen carnage by bloodlessly crushing characters who had been turned to stone. This freedom was especially visible in the “City of Stone” arc, where Demona uses a spell to turn all humans in Manhattan to stone from sunset to sunrise.

“Sometimes the decisions that were made seemed a little ironic to us,” Weisman explains. “We’ve been told you can show Demona smashing a handful of characters, but you don’t want it to seem free. We wanted her to blow someone up as she walked off the stage and they said that was too much. Someone said, ‘Well, what if she shoots and blasts a woman’s arm, but otherwise she’s okay?’ And the answer was, “OK, you can do it. I thought, ‘It’s dark and they don’t even realize it.’ Everyone is shattered into a million pieces and dead. This woman is going to turn back to flesh at sunrise and half of her arm is going to be gone and she is going to bleed. It’s just awful.

Conflicts with Disney executives weren’t always so predictable. While recording with Gary Krisel, then director of Walt Disney Television Animation, Weisman and writer Gary Sperling described an upcoming plot in which Xanatos married his chief mercenary ally Fox and the two had a child. While the episode hasn’t aired yet, it had already been written and animated.

Rather than giving up on the job, Disney allowed the plot to move forward and it helped develop these characters and even provided a chance for the villains to team up with the heroes to protect their son.

But while many aspects of the serialized story were planned well in advance as the Gargoyles team sought to build a complex universe, they were also open to a change of course. Fox was originally intended simply to be a loyal servant who deeply admired Xanatos. But then Weisman heard actor Laura San Giacomo read the line: “He’s the brightest man on the planet.”

“I was like, ‘Holy shit. Fox is in love with Xanatos. It’s really interesting. Let’s go with that, ”Weisman says. “We started to conceive this idea of ​​getting married. We thought Xanatos wouldn’t marry a servant. He must respect it. We started to develop her as a more fully realized character and to develop their relationship. “

I thought, ‘Holy shit. Fox is in love with Xanatos. It’s really interesting. Let’s run with this.

Episodes showed the two to be equal in chess and explained Fox’s complex history as the daughter of a wealthy businessman and Fairy Queen Titania. While Xantos originally explained their relationship as a matter of genetic compatibility and similar goals, she became a true love and helped make Xanatos an even more complex character.

Another case of villainous serendipity arose when Weisman listened to the sound mix of the video output of the show’s first five episodes and continued to hear Elisa Salli Richardson actor say Thailog, which is Goliath’s name from the character of Keith David upside down.

“I was like, ‘We have one of the greatest actors of all time as Goliath and he’s wonderful in that character,” Weisman recalls. “But there are whole aspects of his talent that we just can’t use for Goliath because that would be totally out of character for Goliath. What if Goliath is the bad guy? What if you take Xanatos’ state of mind and put it on Goliath? Let Xanatos clone Goliath, educate him like Xanatos thinks he should be educated. What comes out on the other side is the opposite of Goliath. The origin of this was that I heard this word backwards over and over again. We just tried to stay open to that sort of thing.

Not all the villainous plots Weisman wanted to make were accepted. One in two parts where the powerful witches responsible for the bond between Demona and Macbeth, the Weird Sisters, trapped the heroes in a staging of the play of Shakespeare was famous… well also weird to risk two episodes on it. Weisman dropped the idea because he didn’t think he could cram even the most condensed version of the tragedy plus a framing device into just 22 minutes.

“I wanted to use Shakespearean dialogue and I thought the kids would understand,” Weisman explains. “It would be high but understandable. I thought I could do it, but they were a lot less convinced.

But that was the thing about this show. Weisman and his fellow screenwriters have always pushed the boundaries of what a quote / non-quote children’s show can do, and that influence continues to be felt in the world of television animation today.

Weisman viewed Gargoyles as a superhero show with no capes or tights. After the third season ended in 1997, he would continue his work creating complex villains for comic book adaptations like The Spectacular Spider-Man and Young Justice. Yet there are still plenty of fans who would love to see Xanatos, Demona, Macbeth, and the rest of the Gargoyles characters have another chance to shine.

“It was a good gig,” Frakes says. “We’re still talking about that 1994 show. I’ve done a lot of things that no one talks about anymore, but Gargoyles still has a heartbeat based on Weisman’s work and fan loyalty.

Who is your favorite Gargoyles villain? Let us know in the comments!