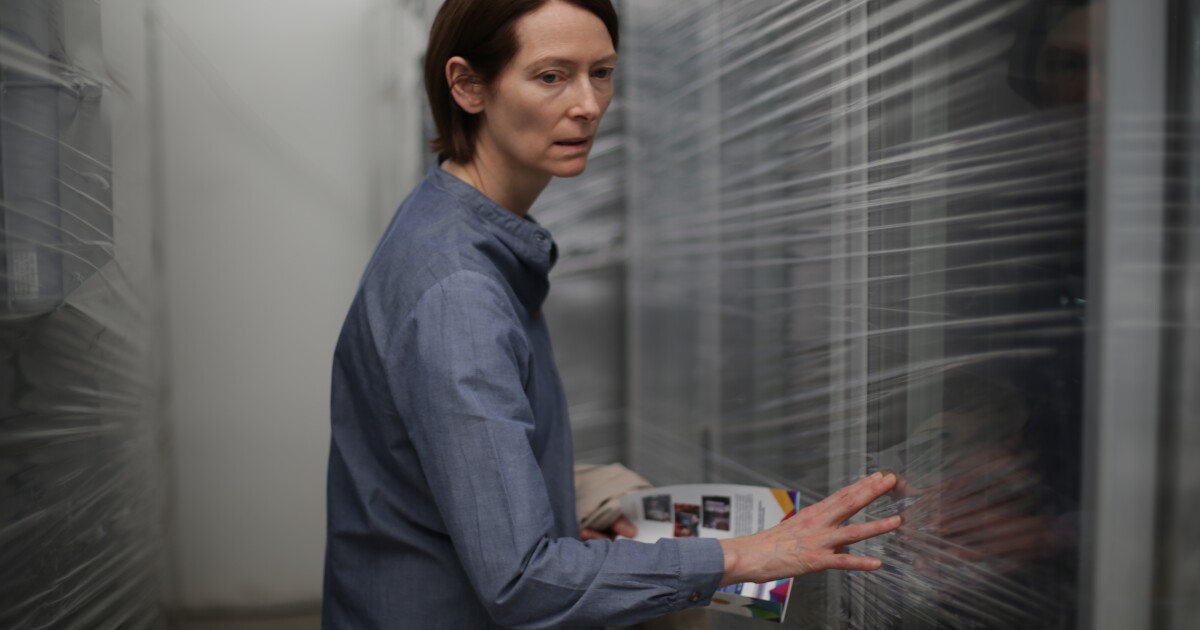 “Memoria” begins with a bump in the night, or very early in the morning. We are in a dark room, with just enough light to reveal the silhouette of a woman as she is awakened by a loud noise – “a rumble from the Earth’s core”, as she would later describe it. She sits up in bed, listening intently and scanning the shadows for the source of this disturbance. Is it a construction team that starts early? (It doesn’t.) What exactly is that sound and why does it haunt her so much, other than her growing realization that she may be the only one who can hear it?

That last question propels this latest wonderment from Thai writer-director Apichatpong Weerasethakul, whose beautiful and spellbinding films (including “Syndromes and a Century” and “Uncle Boonmee Who Can Recall His Past Lives”) have earned him a devoted international following. If you’re familiar with Weerasethakul’s work, some of what you see in “Memoria,” which won a jury prize at Cannes last year, might not surprise you: clinical rooms and lush landscapes; long, one-take sequences that observe more than they explain; a sense of enchantment that creeps almost imperceptibly into each stilled frame. But while “Memoria” is a magnificent reaffirmation of form, it’s also a bold excursion into new territory.

Shot in Colombia (which he represented in the recent race for the International Feature Film Oscars), it is the director’s first feature produced entirely outside of Thailand. It also marks his first collaboration with a Hollywood star, and it says a lot about Weerasethakul’s methods that Tilda Swinton, often cataloged as the most extravagant element of a film, provides an anchor note of calm here. The story begins in Bogotá, where Jessica (Swinton), a Scottish-born orchidologist who lives in nearby Medellín, has come to visit her sick sister. As these sounds disrupt her waking moments and keep her awake, she begins to search for their origins – a mission that becomes increasingly hypnotic and unsettling as it leads her into the surrounding forest.

With its subtly bifurcated, city-country structure, “Memoria” echoes some of its predecessors, in particular “Blissfully Yours” and “Tropical Malady”. But the differences are as striking as the similarities. Almost all of Weerasethakul’s films can be approached as some sort of mystery, but “Memoria” is the first to present itself so explicitly as a detective story. And while sound has always been a crucial element of his formal design – his films are veritable symphonies of rushing water, chattering wildlife and soaring Thai pop – he has never been so attentive to the contours of its soundscape, nor more insistent that we not only watch but listen. (His main collaborators here are sound designer Akritchalerm Kalayanamitr, sound supervisor Javier Umpiérrez and sound director Raúl Locatelli.)

In one of the film’s most enveloping scenes – a demonstration of how easily, in Weerasethakul’s hands, the mundane can slip into the magical – Jessica enlists the help of a young sound engineer, Hernán ( Juan Pablo Urrego). In great detail, she describes the thud she heard (“a big ball of concrete falling into a metal well surrounded by seawater”), which Hernán tries to reproduce using a movie sound effects library. A digital reproduction played on a computer, he warns, might come close to what she hears, but won’t have the same impact – a statement that reverberates here in a way that may even go beyond his own intentions. from Weerasethakul.

Here, it may be worth noting that “Memoria” is the beneficiary of a proper experimental release strategy devised by its distributor, Neon. (It opens this Friday for a week at Nuart and will play in other Los Angeles theaters in the coming weeks.) The idea is for the film to be shown exclusively and forever on the big screen, a theater and a city at the times; it will never be made available on DVD or home streaming platforms. When this plan was announced months ago, some dismissed it as elitist – not the first time that word has been thrown at Weerasethakul. Others, including myself, couldn’t help but applaud Neon for treating “Memoria” not just as another piece of streamable content, but more like a work of art that begs to be tackled. on its own terms and lived under the best possible conditions.

To put it another way: Weerasethakul doesn’t make convenient films, and our culture of instant cinematic gratification could hardly be more antithetical to how he views the world. And so there’s something to be said for allowing his film to reach his audience at a pace that matches his own serene, meditative rhythms. When you go to see “Memoria” – and I urge you to take the time to see it – you may feel an instinctive kinship with Jessica from that opening burst: here you are, just like her, having left the house only to find yourself sitting in the dark, watching and listening and trying to figure out what’s going on. There’s pleasure in this confusion, and within moments you find yourself enjoying Jessica’s company — and marveling at Swinton’s ability to harness and minimize her natural magnetism.

This isn’t the first time she’s modulated her screen presence in the service of an author’s otherworldly vision, or proven herself to be an exceptionally gifted polyglot. (After dabbling in Hungarian in “The Man From London” and Russian-accented Italian in “I Am Love,” Swinton speaks Spanish here with the slightly hesitant fluency of a longtime expat.) It’s a wonderfully self-effacing performance from an actor who usually can’t help but grab the camera’s attention. Here, cinematographer Sayombhu Mukdeeprom (shooting on 35mm film) maintains a watchful distance from Swinton, rarely shooting close-ups (the rare exception is a dropper) and finding the expressive depths in his precise body and free Language.

Warm but reserved, happy to talk but happier to listen, Jessica awakens your protective instincts and your identification. But if she serves as a sort of surrogate for the audience, she could also be a stand-in for Weerasethakul: an inquisitive and sensitive outsider, humbly engaging with the enigmas of a culture not her own. We watch her walk the streets of Bogotá, stroll through an art gallery and buy a refrigerator for her orchids. She sits with her recovering sister (Agnes Brekke) in a hospital consulting an archaeologist (Jeanne Balibar) who is studying ancient human remains. In time, Jessica will travel to the countryside, not far from where these remains were excavated, and make contact with an older fisherman (a remarkable Elkin Díaz). There, in an idyll beside a ravishingly beautiful river, they weave a bond as inexplicable as it is profound.

The fisherman’s name is Hernán, and the possibility that he and the sound engineer are the same person – or alternate versions of it – would hardly be out of place in the cinematic universe of Weerasethakul, where the transmigration of souls is a data. In her own way, too, Jessica has access to someone else’s consciousness. As the elder Hernán shares a draft of his mind-blowing homemade brew and talks about his own personal story, Jessica seems to go blank. It becomes a vessel – “an antenna”, in the words of its host – for the perceptions, ideas and memories of others. Hernán describes himself as a “hard drive,” a bottomless reservoir of memories, and references to outdated technology further immerse us in a world that feels both far from home and out of time.

‘Memoria’, as its title suggests, is about the excavation and resuscitation of lost memories, the preservation of things in danger of being lost, destroyed or forgotten. These could include the traditions of Colombia’s indigenous people, or perhaps the lives affected by the armed conflict that has steadily engulfed the nation since the 1960s. But Weerasethakul has no use for conventional history lessons. He loves people in front of his camera, and his love is contagious. He is also fascinated by the forces of decay and impermanence, and the possibility of using technology to trick them or at least slow them down. Jessica’s refrigerators are one such mechanism; cinema is another.

And cinema, as Weerasethakul reminds us, is still a young art, whose properties and possibilities are still in the process of being revealed. An explanation for those strange sounds materializes, and even coming from a filmmaker who groomed us to expect the otherworldly, it’s something to see – and to hear. A hymn to the distant past that takes place in a rigorous present, “Memoria” finally reveals itself as a vision of the future – a declaration of faith in a medium that has not lost its power of astonishment.

In Spanish and English with English subtitles