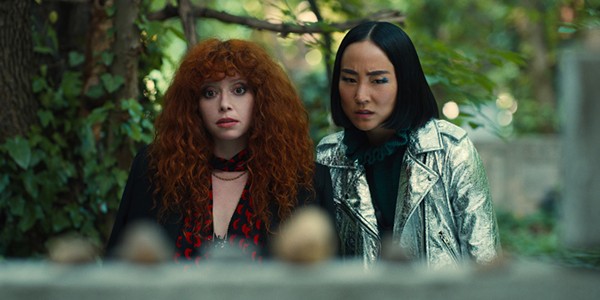 Russian doll – After a three-year wait, the time-looping comedy-drama is back for a second season, in which it’s revealed that Natasha Lyonne’s Nadia was finally able to move past the fateful events of her 36th birthday. But while that might sound like cause for celebration, it only puts her in the middle of a whole new metaphysical situation. Proving something I’ve always said: don’t expect anything good to happen after your mid-30s. (netflix)

Yakamoz S-245 – You know In the night, the Belgian series about airplane passengers who fight to survive an extinction-level event when the sun turns kablooey? Well, here’s a spin-off series about some people trying to overcome the same cataclysm by boarding a submarine. If it’s successful, we’ll see follow-ups taking place wherever you can go to avoid daylight. Can I recommend Hot Topic? (netflix)

Thursday premieres:
bang bang baby — 1980s Italy is the setting for this series about a teenage girl who relies on the music and television of her time to stay centered after falling into the mafia. There’s a switch: counting on popular entertainment to take you a way of organized crime. (Amazon Prime)

Captivated audience — With so many true-crime shows vying for our eyeballs, it was only a matter of time before they started morphing into us. This three-part docuseries revisits the story of child abduction victim Steven Stayner (of I know my name is Steven fame), but with particular emphasis on the impact that media coverage of the case had on him and his family. Given that her older brother, Cary, is now on death row for the murders of four women, the answer is clearly not “They all got jobs with Nancy Grace and lived happily ever after.” (Hulu)

The stewardess – In Season 2, Kaley Cuoco’s Cassie attends AA meetings, works for the CIA, and confronts a look-alike who may be trying to take her place. Wait, I’m confused. Take his place at the CIA? In AA? At the Cheesecake Factory, perhaps? (HBO Max)

Viruses: 32 – Flesh-hungry zombies are on the loose, but their loss could be the 32-second rest period they need after each attack. Is that enough time for their potential victims to eliminate them? You’ll hold your breath at every Mississippi! (quiver)

Friday premieres:
On the way for the ride — The summer before she leaves for college, a self-possessed girl (Emma Pasarow) teams up with a fellow insomniac (Belmont Cameli) for the nocturnal adventures she never knew she was missing . Three words: 24-hour mini golf. (netflix)

The Biggest Little Farm: The Return – Disney kicks off its Earth Day celebrations by teaming up with National Geographic to revisit John and Molly Chester, the environmentally responsible farmers whose California farm was the subject of an acclaimed documentary in 2018. their part of the country? Well, a lamb named Moe and a pig named Emma, ​​to name just two new arrivals. And there’s also a Wawa on the property now, because you have to keep up with the times. (disney+)

Explorer: The Last Tepui – Another National Geographic Earth Day special, this one following a rock-climbing team who must carry biologist Bruce Means up a steep 1,000-foot cliff in the Amazon so he can search for new animal species. And you? You won’t even help your best friend move a couch, you selfish son of a bitch. (disney+)

Heart stroke – Alice Oseman’s graphic novel becomes a teen drama series about two young British boys who fall in love while attending high school. Or as we used to call it, “next in line to the throne”. (netflix)

Oprah + Viola: A Netflix Special Event – To promote her new autobiography, Viola Davis sits down with Oprah Winfrey to explain her long road to happiness, including how she “manifested the loves in her life.” Wow, you mean we don’t need to be grateful to the people we care about anymore? Can we just take credit for creating them? My dealer better give me a damn Father’s Day card, that’s all I can say. (netflix)

Polar bear — The management team that brought us Penguins and Bear celebrates Earth Day with another documentary portrait of family life in the animal kingdom. This one is about a polar bear mom who relies on the memories of her own upbringing to raise her child. I’m sorry, but when you speculate on an arctic mammal’s internal monologue, I don’t think it qualifies as a documentary anymore. Did they tell the shrink about this bear or what? (disney+)

sell sunset – Brokers Jason Oppenheim and Chrishell Stause have since separated in real life, so searching for clues to trouble in paradise should make for a fun running game while you watch Season 5. Oppenheim said The mirror he’s not ready to discuss ending the relationship, so you know what that means: Season 6 is where we’ll have to go for the real red table talk. (netflix)

They call me magic – This four-part retrospective on the life and career of Magic Johnson includes commentary from the likes of Snoop Dogg, Larry Bird and former President Barack Obama. Seriously, did they catch Snoop? This guy has a lot to do! (AppleTV+)

First Tuesdays:
David Spade: Nothing personal – Formerly known as The Cast Member of SNL Seasons 16-18 Who is most likely to be slapped for insulting a celebrity, David Spade faces a real identity crisis as his first stand-up special in eight years is determined to go down. “What else do I have?” you can almost hear him worry as he opens another can of Pringle Scorchin and obsessively refreshes page six. Maybe Eddie Murphy will send it for old times sake. (netflix)