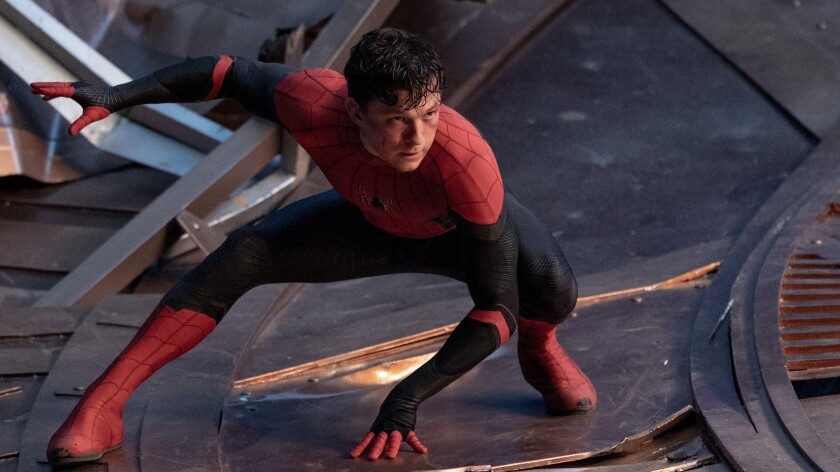 It’s been a long wait and fans have lost their minds, but we finally have the second trailer for the highly anticipated Spidey sequel, Spider-Man: No Path Home.

The trailer for the Sony / Marvel multiversal film is packed with cameos, references, and winks, and you miss some moments worth digging into. As such, we thought we’d take a look at what’s going on in this awesome trailer. We’ll assume that most people have seen the trailer by this point and are talking about some interesting information rather than taking you step by step through the entire trailer.

Let’s put that aside now; the elephant in the room: the other Spider-Men. While there are many rumors of the return of Spider-Man’s versions of Tobey Maguire and Andrew Garfield, they have yet to be shown. While many fans will be disappointed with this, I think this trailer still essentially confirms their appearance in two moments. First off, this photo shows Peter from the MCU jumping towards three villains. He’s a good shot, but if you notice it TWO of those baddies don’t jump on him. Electro flies above him, Sandman could swing over him, while the Lizard seems to jump on nothing. I have no doubt that this is a team shot with the other two Spider-Men that has been removed from this scene for the purposes of the trailer.

If you have any doubts about this, there are some international versions of the trailer that show Lizard getting hit by something or someone. There’s apparently nothing there, but it’s definitely a spider kick in the face of one of the previous wall crawlers.

The tag at the end of the trailer also shows Dr. Strange unable to stop the clash of universes, “They’re starting to manifest and I can’t stop them.” Making this the end of the trailer feels a lot like an “If You Know, You Know” moment, a brief hint of a Spider-Men multiverse crossover that’s almost confirmed.

But let’s talk about what we saw in the trailer. The biggest problem with this trailer is the in-depth examination of the film’s multitude of villains. So let’s see each of them and what kind of role they play here.

As confirmed in the latest trailer, Alfred Molina is back as Doctor Otto Octavius, a laughable comic book name that Peter and his friends are quick to point out. While rumors suggest Willem Dafoe’s Green Goblin is the film’s main villain, Doc Ock appears to be in the spotlight in marketing. Perhaps this is because Molina spilled the beans months before the trailers fell.

We got a better look at the fight on the bridge and saw the eight-limbed villain receiving what appears to be an Iron Man-style tentacle upgrade. However, based on Peter’s plan of moving the nanotechnology around his body to defend himself from Octavius ​​punching his chest, I think it’s more likely that Peter is using the technology to neutralize the tentacles. Outside of the main fight around the bridge, we only see him in what appears to be a cell in the Sanctum Sanctorum. In a brief shot, we can see that its tentacles are closed with the obvious nanotechnology of the color red. Further supporting the idea that the Iron-Spider suit was used to stop the tentacles, perhaps the minimum nanotechnology that remains leads to the creation of the integrated suit, a hybrid of his late suit. Far from home and the iron spider.

I guess Doc Ock’s time as a villain in the movie is pretty minimal. At the end of Spider-Man 2, he sacrificed his life to save the day, so his villainous entry into the film will likely be brief. Being displaced universes with evil AI tentacles probably bothers you a bit, and realizing that this Spidey isn’t his Peter certainly shocks him, perhaps in some sort of awareness of his wrongdoing.

A shot later in the trailer even shows Octavius ​​falling from what appears to be an Electro explosion, potentially hinting at some sort of showdown between the classic villains. Fans were pretty confused about the inclusion of Doc Ock when the character took a heroic turn in his last appearance, but I doubt that wasn’t addressed.

While we may never get to see his face, Willem Dafoe is back as the Green Goblin with the classic armor and helmet in all its wacky glory. As I mentioned before, he’s probably the main villain of the film, although his presence in the trailer is somewhat lacking. His presence during the fight on the bridge is minimal, but his bombs clearly contribute to the chaos that ensues, possibly orchestrating various encounters with villains and providing the chaos that causes Peter’s clash with Octavius.

“Peter, you struggle to have everything you want while the world tries to make you choose.” Disturbing dialogue from Dafoe’s iconic Norman Osborn voice, but what choice is presented here? I guess he’s trying to manipulate Peter into helping him. Somehow, he’s aware of the situation Peter is facing and offers a helping hand that this Peter, in his naive perception of the character, is likely to crack.

Not only do we see the classic costume of Spider-Man (2002), we also get a very brief preview of a new look. No helmet, damaged armor, dark glasses and what could be a balaclava. Presumably, he struggles to keep his outfit in great shape after meeting Spidey and needs to make some adjustments to his costume.

I’m also concerned that we may see the demise of an MCU fan favorite at the hands of Green Goblin, Happy Hogan. In the last trailer, I got a brief glimpse of Happy in a car as gunmen approached. In this trailer, we see the same gunmen approaching the building that appears to be blowing up when Peter can’t stop a pumpkin bomb. In the resulting explosion, we can see a car explode. While not explicitly shown, it seems there is a chance it could be happy. Later in the trailer, Peter consoles in Aunt May, her face lit with a fiery glow. “It’s my fault, I can’t save everyone,” there’s no way this line isn’t caused by some sort of premature loss. Jamie Foxx’s Electro also returns, this time from The Incredible Spider-Man frank and with a much more comedic look than we last saw; big yellow bolts in his face and everything. Previous speculation suggested that the multiverse characters in the film would not be the exact versions of the previous films but slight “variations.”

However, I think the change in Electro’s design is just one more evolution in its capabilities. One of the first shots of him in the trailer seems to show a transition from familiar blue to comically precise yellow. The photo also gives a very clear look at Spidey’s new black and gold costume which has built-in magical elements. An enchantment lights up around his wrist before what we can assume is his first battle with Electro. The costume also appears to have a phone taped to it, but why is that a mystery to me.

“You’re not going to take this away from me” is the only dialogue we get from Electro, it doesn’t say much beyond the motivations already established, they don’t want Spider-Man to kill them. Electro is definitely an exciting comeback, despite the negative reception from The incredible Spider-Man 2, it was the highlight and visually fantastic. There really isn’t much to say about Lizard and Sandman other than that they’re back. They both barely appear in the last two shots of the trailer, and I really don’t expect much from these characters. However, I think it’s worth noting that these two didn’t die in their movies. Doctor Strange implies that the villains all died at the hands of their Spider-Man, so unless it hints at things beyond what we’ve seen in previous films, this is something that needs to be. Explain.

It also seems worth mentioning that just like Doc Ock, Sandman was a good guy at the end of Spider-Man 3. He had done bad things but Peter let him go, so why did he become a villain again is an interesting question to ponder. In the chaos of alternate universe villains arriving and teaming up, Peter even manages to fight Doctor Strange. In an attempt to be the hero he always tries to be, it appears he’s trying to save the villains from a fate he feels responsible for. These villains were killed by a Spider-Man, and perhaps out of guilt for his involvement in Mysterio’s death, he wants to help them.

The final battle appears to take place over the Statue of Liberty, which is about as New York City as it gets. Although it appears the members of the MCU have decided it needs an upgrade, with a giant Captain America shield mounted on it and causing chaos in the final moments of the trailer.

Speaking of the final moments of the trailer, in what is almost certainly a reminder of Gwen Stacy’s death, MJ falls off the scaffolding in the final battle. Ned tries to save her, but remains hanged, so it’s up to Peter to save her in a tense dive through the construction site.

I think someone is going to die here, but not MJ. With Peter distracted saving MJ, a suspended Ned will not be able to maintain his hold and just when MJ is saved he will fall. This film seems to have a much darker tone than the previous two installments, and a major loss in Peter’s life seems inevitable.

Spider-Man: No Path Home is one of the most anticipated superhero movies of all time, this trailer is packed with information and we won’t have to wait long for the massive multiverse mash-up.