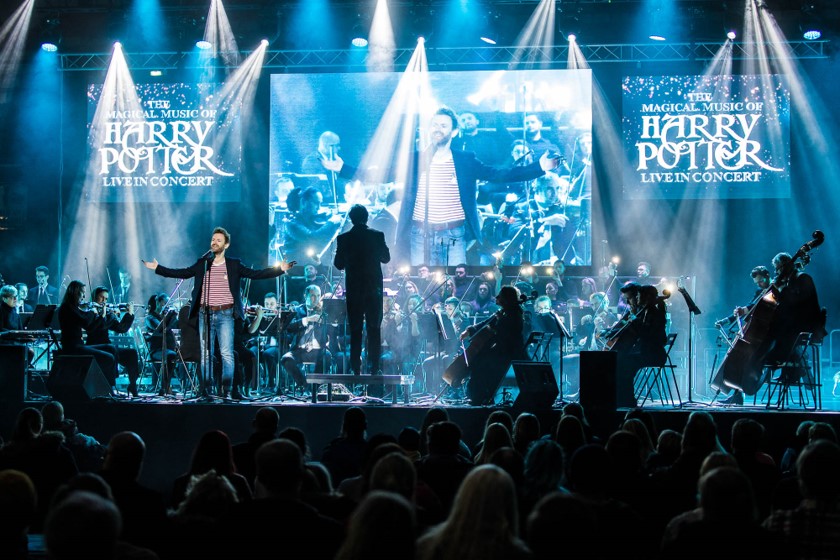 A one-of-a-kind cinematic and musical experience: The Magical Music of Harry Potter – Live in
Concert, now with a Weasley – Chris Rankin!
The concert presents the best music of the
films with the London Symphonic & Philharmonic Film Orchestra.

The Harry Potter films are among the most successful in cinematic history. The award-winning film score is now touring the world in a unique concert evening for the first time. Original actors, star soloists, a choir and a symphony orchestra will bring the magical music of Harry Potter to life. Visitors will discover Harry Potter’s most significant musical moments. The program includes the soundtracks of films by four-time Oscar winner John Williams, Patrick Doyle, Nicolas Hooper and Oscar winner Alexander Desplat, as well as the best music from “Harry Potter and the Cursed Child”, which received many awards in London and New York, becoming one of the most famous theatrical performances in the world.

The evening presents a musical journey into a magical world with friendship, adventure, love and cohesion in the dangerous world of magicians. Visitors can expect to be immersed in an enchanted world thanks to the most advanced technology of light, sound and laser staging as well as a unique sound dimension that will give them goosebumps. The visual and magical effects are designed to make every Harry Potter fan’s heart beat a little faster. Our crowd favourite, Chris Rankin, Percy Weasley himself, will be attending all the shows creating an unforgettable experience full of fun and good humor.

The public will discover the musical “Best of Harry Potter” of the eight films and works written by four talented composers. John Williams (Star Wars, ET, Indiana Jones, Jurassic Park) composed the music for the first three films, such as the famous “Hedwig’s Theme”, the leitmotif of the series and “Double Trouble” – the classic Hogwarts motif with a choir of children, as well as the funny “Aunt Marge´s Waltz” and “Witches, Wands and Wizards”. Titles like Patrick Doyle’s “Hogwarts Hymn” from the fourth Harry Potter film will bring audiences into the dark and mysterious world of the Triwizard Tournament. Nicholas Hooper composed “Dumbledore’s Farewell” and helped shape and mature the music for Harry Potter in the fifth and sixth films alongside Alexandre Desplat with “Lily`s Theme”, who composed the music for the final two episodes of the film series. The combination of these composers and the music will create a grand and unforgettable musical experience.

Chris is internationally recognized as Percy Weasley, a role he played throughout the Harry Potter film franchise. At the age of 16, Chris wrote a letter requesting an audition for “Harry Potter” and never looked back.

Chris has recently stepped behind the camera helping to coordinate many high end television productions. His recent work includes “A Discovery of Witches” (Sky/Bad Wolf), “Downton Abbey” (ITV/Carnival), “The Bastard Executioner” (FOX), “Atlantis” (BBC/Urban Myth) and last year directed his first short, ‘Dad’, which was shortlisted as part of the 2020 Cardiff International Film Festival. In addition to screen projects, Chris remains committed to live performance, both directing of the Brecon Little Theater theater company and appearing in pantomime. He continues to appear regularly at fan-related events around the world, from smaller art festivals to major franchise shows.

Chris is also an avid blogger, traveler, musical theater enthusiast, fan boy, LGBTQ+ ally, and dog lover. He is a patron of the charity Transfiguring Adoption and regularly supports the work of the Albert Kennedy Trust.