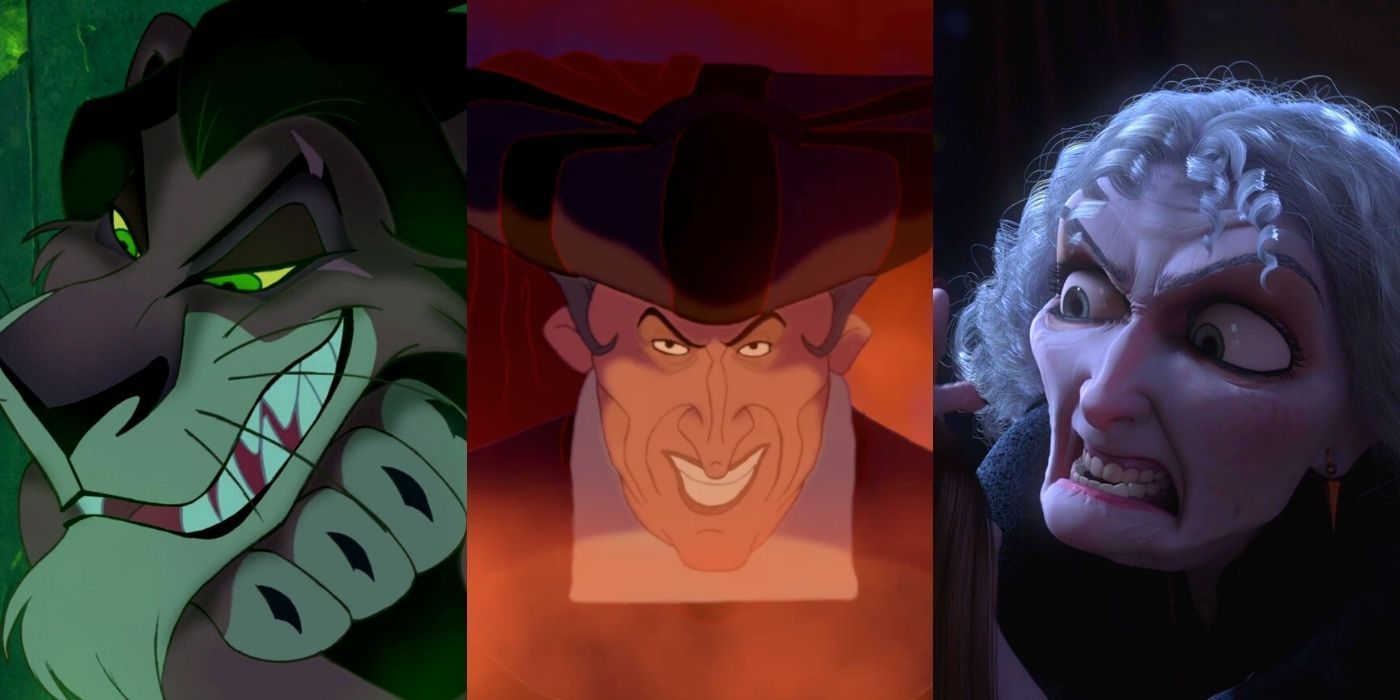 It’s no secret that Disney is a powerhouse that produces stellar films with unique storylines and captivating character arcs. However, when it comes to old Disney animated films, a key element of the movies’ success is the sonic, lyrically clever musical numbers.

RELATED: Mulan and 9 Other Classic Disney Movies That Don’t Have a Villain Song

While Encanto is notable for its lack of a traditional Disney villain, the main enemy usually gets a song that showcases his villainy. Disney villain songs are often incredibly catchy, but there’s almost always a deeper, darker meaning behind the lyrics. Between famous villains like Scar, Ursula, and even Gaston, the characters aren’t shy about expressing their most sinister thoughts.

Jafar is clearly one of Disney’s most evil villains, but many of his worst deeds are overlooked by fans, including his enslavement of Genie and the captivity of Jasmine. However, for a potentially dangerous and powerful villain, viewers expected more from his villain song.

The imagery and eerie nature of the scene definitely gave fans chills, with lyrics like “Read my lips and come to grips with reality / Yes, meet a blast from your past / Whose lies were too good for last / Say hello to your precious Prince Ali!” Although Jafar’s revival of Prince Ali exposed Aladdin’s secrets by slandering his character, he could have done much worse damage lyrically due to his true evil potential.

While a powerful witch, she chose to use her powers for her own selfish wishes, but disguised them as useful favors. When Ariel was in need and had no one to turn to, Ursula took advantage and hatched her own devious plan.

RELATED: 5 Disney Villains Who Fooled Everyone (& 5 We All Saw Coming)

In the long “Poor Unfortunate Souls”, she details her life story, while manipulating Ariel: “And I, fortunately, know a little magic / … I use it in the name of the wretched, the lonely and depressed.” Although Ursula presented herself as an understanding confidante, Ariel, unfortunately, fell in love with her plan in a vulnerable state and like a true villain, Ursula’s song was compelling and cunning.

Considering Tangled is a relatively new Disney movie, many fans would say that Mother Gothel is the most underrated Disney villain. While some may believe she was just overprotective, others see a selfish narcissistic personality in her own right.

When Mother Gothel sings lyrics like “Mother knows best, take it from your mama / You won’t survive on your own / Sloppy, underdressed, immature, clumsy / Please they’ll eat you alive / . .. I’m just saying “because I love you”, her insecurity is on display, as it’s quite clear that Rapunzel is being used for her magic and her mother just wants to control her Gothel knows a thing or two about manipulation and insults, and there’s no doubt that she uses it to her own selfish advantage, and her evil nature is further proven once she hatches several sinister plans to take Rapunzel back after she gets lost. escaped from the castle.

Although the famous song wasn’t sung or written by Cruella herself, but rather by Roger, that’s almost what makes her reputation even scarier. However, Cruella de Vil’s most miserable quotes and her highly questionable motives are enough to prove why she’s such a danger.

Although the song has a fairly catchy and catchy melody, the lyrics don’t shy away from the wishes of the family as to its fate: “That vampire bat, that inhuman beast / She should be locked up and never let loose!” The movie kind of takes a darker turn once viewers realize Cruella’s purely sick and evil intentions, to sacrifice the dogs in order to strip them of their fur to turn them into clothes.

When fans think of the best Disney villains, Scar comes to mind. Between killing his own brother, Mufasa, and wishing the same fate on his son, Simba, it’s no secret that he’s hatching some pretty devious plans. Thinking more deeply about the plot, viewers agree that the idea behind the plot is quite dark for a kids movie.

The somewhat humorous, yet chilling, musical number between the hyenas and the silly jokes of the scar trade: “We’ll be ready! For what? / For the death of the king! / Why? Is he sick? / No, fool! We’re going to kill him and Simba!” With the hyenas’ cult walk and Scar’s sneaky demeanor, the scene is sure to give fans chills.

3 Gaston (Beauty and the Beast)

Another famous Disney narcissist, Gaston was not only obsessed with himself, but also with power and influence. The villain single-handedly gathered the entire village using fear and manipulation, convincing them that the Beast is a danger to society.

With the song’s premise summed up in one lyric, “We’re not safe until his head is up on my wall, I say we slay the beast,” Gaston’s danger factor is clear. The villain goes on to inform people that the Beast will hunt them down and eat their children at night when he actually remains isolated in his castle, showing the film’s deeper message about the mob mentality movement. Specifically, the film describes how anyone can make a claim without proof and easily form a mob, as long as people are vulnerable and trusting.

2 Minister Frollo (The Hunchback of Notre-Dame)

With the The hunchback of Notre-Dame de Paris Being one of the most multi-layered Disney villain songs, there’s quite a bit fans didn’t know about “Hellfire” and likely missed as kids. The film has a surprisingly mild content rating of G, considering the coverage of serious topics like lust and violence. Despite being a minister, Frollo has some seriously twisted morals, between his attempt to kill baby Quasimodo at the very beginning of the film and his ruthless shaming of gypsies, “Hellfire” being no exception to this conflict.

With lyrics like “Destroy Esmeralda and let her taste the fires of hell / Or else let her be mine and mine alone”, it’s clear that her struggle with sin has her blaming someone. other than himself. While that’s a problematic take on its own, it’s even more shocking to see a villain struggle morally. Ironically, Frollo had no problem being cruel throughout the film, however, this is a rare villain song where viewers see an enemy struggling with temptation, who deep down wants to do the right thing. thing, but goes about it in a very incorrect and horrible way.

Pocahontas is a Disney movie that most viewers know is extremely problematic, and the song “Savages” proves it. From horrific slurs by colonizers to death threats aimed at Indigenous peoples, the song is a grim portrait of the hatred each side held for each other, with Disney fans wondering how the film was rated G while covering such a violent film. and disturbing subject.

Shockingly enough, many fans overlook Governor Ratcliffe in terms of Disney villains, even though he’s one of the baddest of them all. Between nasty lyrics like “Their skin is hellish red / They’re only good dead / They’re vermin like I said, and worse” and “They’re not like you and me / What wants say they have to be mean,” the song reeks of racism and hate at its worst, making “Savages” one of the darkest and most sinister Disney villain songs around.

NEXT: Which Disney Villain Are You, Based On Your Chinese Zodiac Sign?

An entertainment content writer for ScreenRant, who knows a little too much about cheesy things. Whether it’s behind-the-scenes facts about music, movies, TV shows or comics, Kallie is ready to talk about it whether you like it or not!