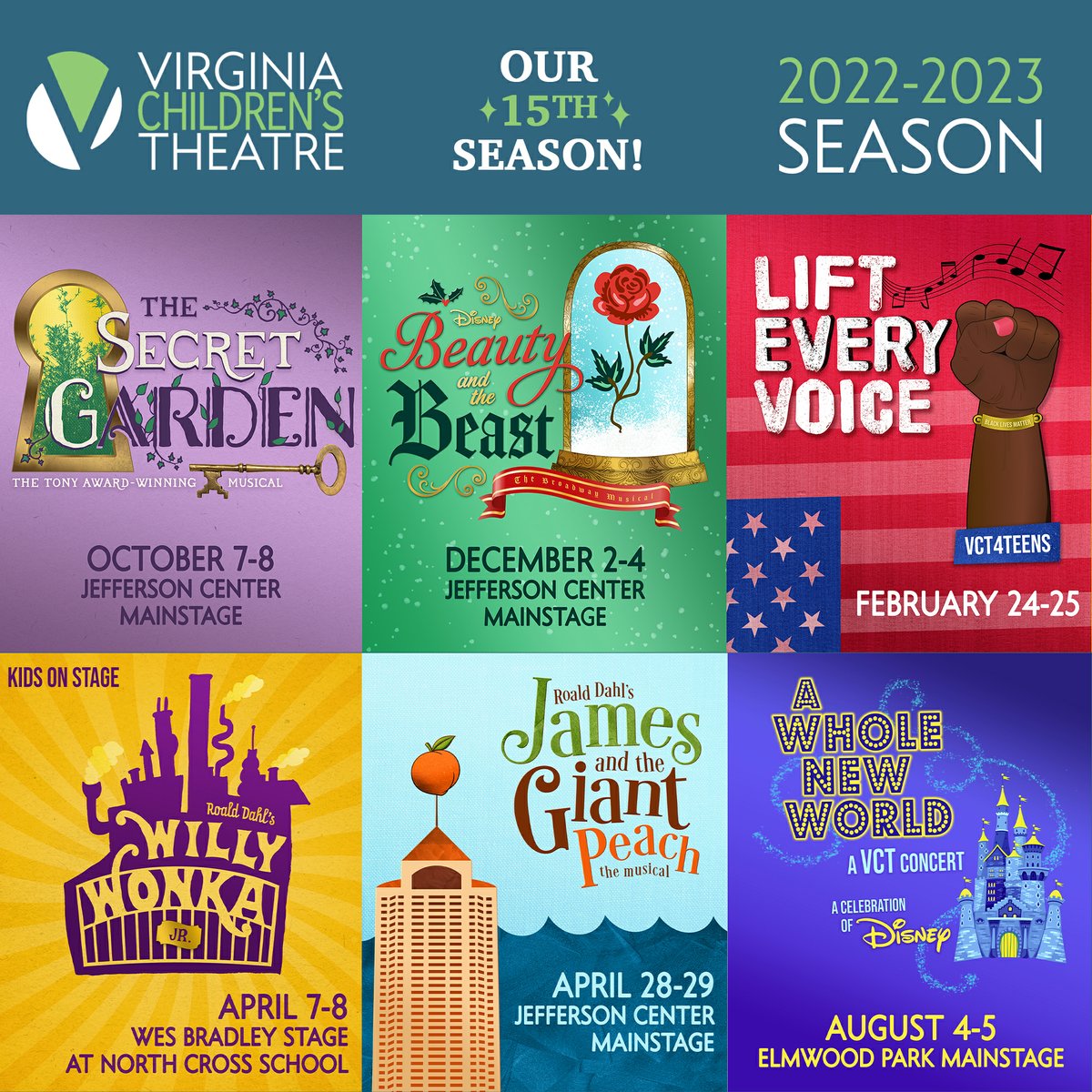 Brett J. Roden, Production Art Director for Virginia Children’s Theater (VCT)announced tonight the company’s upcoming launch Season 2022-2023 of productions. VCT is the only professional theater in the valley with programming designed specifically for young people, schools and their families. The 2022-2023 season will be the company’s 15and season and the season is full of fan favorites.

The season begins with the classic tale of THE SECRET GARDEN. This musical adaptation is a timeless tale filled with love, hope and adventure. For the holiday season, VCT will enchant audiences with a beloved Disney fairy tale full of magic and love as it presents THE BEAUTY AND THE BEAST. Once again, Virginia Children’s Theater will tackle the tough issues facing teens with an original production across the VCT4TEENS program. RAISING EVERY VOICEbased on a true story, is a play about racism in the United States. It offers young actors the opportunity to learn, rehearse and direct a play in a week during spring break, VCT CHILDREN ON STAGE production for this season will be WILLY WONKA, JR. For Spring 2023, adventure, comedy and fantasy fill the stage as VCT presents JAMES AND THE GIANT PEACH, THE MUSIC. This production will be performed on the main stage and will also tour statewide. Back by popular demand, VCT will present a summer concert filled with music and dancing as the theater celebrates Disney music with A WHOLE NEW WORLD: A CELEBRATION OF DISNEY.

“VCT brings audiences another larger-than-life season of top-notch theater, including Broadway-style musicals, a play, our annual KIDS ON STAGE Jr production, our springtime musical TYA (Theater for Young audiences) and a live concert,” says Roden. “It’s a season of love, hope and enchantment and it’s full of adventure! We hope audiences will join us for our 15th season, to fill their hearts with love, laughter and even more.

Tickets for the Company’s 2022-23 season will go on sale in the summer of 2022. For more information, customers may contact VCT at 540.400.7795. Information is also available online at VirginiaChildrensTheatre.org.

Unleash your imagination with the classic and beloved tale brought to life through stunning, haunting melodies. The secret garden is magical and enchanting for people of all ages. When young Mary loses her parents to a cholera outbreak in India, she is sent to live with her only parents who live an isolated life. While living at the mansion, Mary discovers a secret walled garden hidden in the park. Determined to revive the beauty that once was, she unleashes the magic and adventures locked within, changing all of their lives forever. This timeless tale is proof that there is power in love, hope and dreams.

THE BEAUTY AND THE BEAST

The beloved “tale as old as time” will delight audiences for the 2022 festive season. Belle, a young woman living in a provincial town, trades her father’s freedom for her own and is imprisoned in the castle of the beast. The Beast, a young prince trapped under an enchanted spell, must learn to love and be loved so he can be transformed into himself. Hurry up; if the Beast cannot learn his lesson, then he and his family will be doomed for eternity. Singing teapots and candlesticks, magic and an unlikely love story will capture the attention of the whole family in this bewitching story.

Based on a true story, Raise every voice explores the impact of racism in an urban high school. When a racist message is posted on social media and shared in high school, students find themselves examining loyalties, privileges, and even their own history. Critical social issues prevalent in the United States take center stage in this VCT4TEENS production. VCT4TEENS is a program that offers a unique and creative approach to connecting with young people on current issues through a theater arts experience.

by Roald Dahl Willy Wonka, Jr. is a deliciously sumptuous musical that will delight foodies everywhere. Candy maker Willy Wonka creates a spectacular contest where golden tickets are hidden in his famous candy bars. Lucky recipients of Golden Tickets will win a free Wonka Factory tour and a lifetime supply of candy! Chaos ensues when the factory gates are thrown open to the winners. Join VCT on a journey of “pure imagination” for our annual Spring Break / KIDS ON STAGE production.

JAMES AND THE GIANT PEACH, THE MUSIC

A captivating audience of all ages, James and the giant peach is full of unique comedy, top-notch characters, a clever set, and fashionable costumes that will keep the audience engaged all the time. The incredible adventure of James Henry Trotter will fill the fantasy of all those who have always dreamed of escape. Roald Dahl’s story is hilariously brought to life in this delightful dramatization. Families will fall under the spell of the magical sweetness of a young boy on a whirlwind musical adventure to find his chosen family!

A WHOLE NEW WORLD: A CELEBRATION OF DISNEY

Join VCT during the summer of 2023 for an exciting concert, filled with song and dance to celebrate the wonderful music from beloved Disney films. Audiences will be entertained, inspired and drawn into a world full of magic.

Virginia Children’s Theater (VCT) is an independently owned and operated 501(c)3 organization located in Roanoke, Virginia. VCT is the only professional theater in the Commonwealth of Virginia solely dedicated to young people, schools and their families. Each season, VCT produces a variety of high-caliber literary-based musicals, concerts, and professional plays. These productions are produced in the Roanoke Valley and tour throughout the Commonwealth of Virginia. The VCT Theater Academy provides year-round high-quality music, theater and dance education to K-12 students through in-school residencies, in-house classes and camps, and outreach through the commonwealth. VCT is on a mission to inspire, empower and transform the community through the magic of live theater!